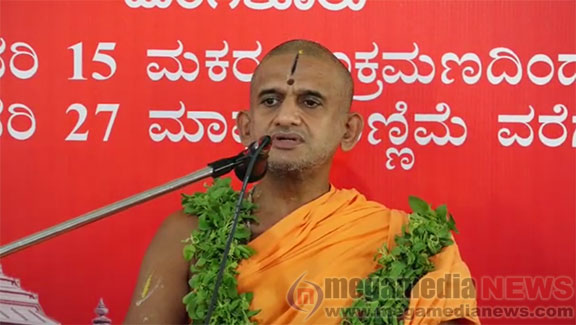 Mangaluru : Udupi Pejawar Mutt Seer  and one of the trustees of the Sri Ram Janmabhoomi Teerth Kshetra Vishwaprasanna Tirtha said here on Friday that the fund-raising drive to build the Ram temple at Ayodhya will commence across the country on January 15, 2021. It will go on for 45 days till February 27.

The volunteers will visit doorsteps of people to collect the funds during the 45-day period, the seer, who is the only trustee from south India, said.

He said that the trust has decided to raise funds from all as it should become a temple for common persons.

Funds from the rich can be collected to build the temple. But common persons should contribute.

The seer said that the temple will be the symbol of pride and respect of Hindus. “People can contribute voluntarily,” he said.

M.B. Puranik, executive president, Vishwa Hindu Parishad, South Karnataka, said that if the rich only contributed it will not be a temple for the common people. For example, the Lakshmi Narayana Temple in Delhi is still known as Birla Mandir.

Later replying to questions by presspersons, the seer said that cow slaughter should be banned. “Lame excuses are being given to take a firm decision on the same,” he said.

The seer said that there should be a law to curb exploitation of women both physically and economically.