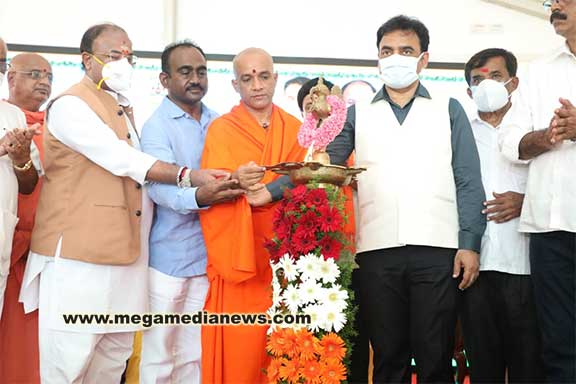 Bengaluru :  Forest and Kannada and Culture Minister Aravind Limbavali has said that the new world-class cultural centre is being built in Banandur village of Bidadi hobli, Ramanagara, with a view to develop the village.

The minister was speaking after he and Deputy Chief Minister Dr C N Ashwath Narayana – who is also in charge of Ramanagara district – laid the foundation stone for the development work in Banandur, which is the native place of Padma Bhushan of Sri Sri Sri Balagangadharanatha Swamiji, the late pontiff of Sri Adichunchanagiri Mutt, on Monday. They also watched a documentary on the life story of the seer after laying the foundation stone.

Limbavali said that the new centre should be made an excellent tourist spot, and the documentary should be shown to the tourists, for them to know the seer’s life story and his achievements. “The social works of the pontiff were unique and inexplicably great. He was always concerned about the welfare of the downtrodden people and worked for the development of not only Adichunchanagiri Hill area, but also the surrounding region. He also contributed greatly to the medical field by organising camps for world-famous doctors to treat children with cleft lips free of charge,” he reminisced.

“Sri Balagangadharanatha Swamiji had started the work to plant and grow five crore saplings on the Sri Adichunchanagiri Mutt premises. This work increased the green cover of the state from 13% to 23%. We have also experienced problems for oxygen supply during Covid-19, and such social works as undertaken by the seer are necessary to increase oxygen supply,” Limbavali stressed.

Further, the minister said that the Kannada and Culture Department has given Rs 25 crore for the project. “The funds, however, may prove insufficient to fulfill the plans that Sri Sri Sri Nirmalananda Swamiji has in mind for the centre. We will try to get more funds from the government,” he added.